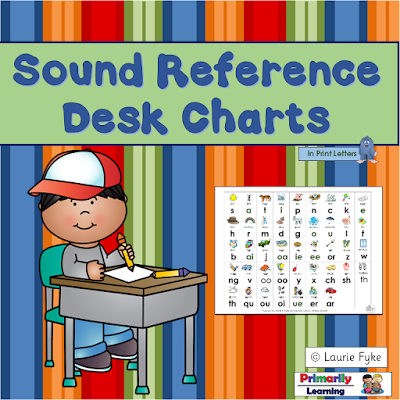 These 4 Phonic Sound Reference Charts provide a visual reference to connect letters and sounds... following the same sequence as programs like Jolly Phonics. It's a comprehensive phonics resource for both staff and students! Unsure of the sound or alternate spelling? Just check out the graphic for the phonetic clue.

1.  The Transparent Alphabet Chart
·       Once these sounds have been taught, the child is able to hear and say the sounds to blend (read), and segment (write) words.   The sounds have been presented in the same order as programs like Jolly Phonics.
2.  Alphabetical Order … A B C…  Beginning, Middle, and Ending SOUNDS … (short vowel sounds)
·       Children often learn the Alphabet Song at an early age… saying the letter names... not the sounds those letters represent. Initially, the sounds are more important than the letter names.  This chart provides the alphabetical sequence of letters and the sounds they represent with a visual reference. (short vowel sounds)
·       A beginning, middle and ending reference for each sound has been provided.  The children will notice that some sounds are not used at the end of a word.

3.  Long Vowel Sounds, Digraphs and Alternate Spellings
·       The long vowel sounds are digraphs!  The opaque alphabet is more complicated as seen by the alternate spellings provided for each sound.
·       Beginning, middle and ending spellings are for provided for /ch/, /sh/ and /th/.

4.  More Spellings
·       The English language is a very complicated language to spell because it is comprised of so many other languages.  We have a variety of additional spellings to familiar sounds.  These sounds need to be taught and learned through repetition… as the child learns to read and write the new sounds.

You may use your PayPal account or PayPal's credit card service.

Educating Everyone 4 Life has earned $44,887.69 in just 8 months since joining
The Best of Teacher Entrepreneurs Marketing Cooperative!

CHECK IT OUT NOW! - Get THOUSANDS  OF PAGE VIEWS  for your TpT Products!

Go to http://www.pinterest.com/TheBestofTPT/ for even more free products!

Please feel free to contact me with any questions: primarilylearning1@gmail.com